In 2013, the Polaris Institute was one of 20 facilitating organizations from around the globe who organized The Climate Space during the World Social Forum in Tunisia.  Climate Space sessions examined how climate change relates to the issues people face daily: access to jobs and economic development, migration, faith communities, food sovereignty, and more. The Climate Space initiative will continue in 2014 and 2015, with a focus on the 2015 World Social Forum in Tunisia.

By Pablo Solon, co-authored with Josie Riffaud and Tony Clarke

On Sunday, hundreds of thousands gathered in New York for one of the biggest marches against climate change. The occasion is the Climate Summit convened by UN Secretary General Ban Ki-moon, the theme of which is "take action." But does that action actually include measures that could do further harm to the planet?

When we, as human beings, get a fever, we immediately get worried and take action. After all, we know that if our body temperature rises to 1.5ºC, let alone 2ºC [3.6 ºF] above the normal average, there can be severe damage, while an increase of 4-6ºC [7.2-10.8 ºF] or more can cause a comatose situation and even death.

Read more →
To confront the climate emergency we need to dismantle the WTO and the free trade regime
Sep 09, 2013 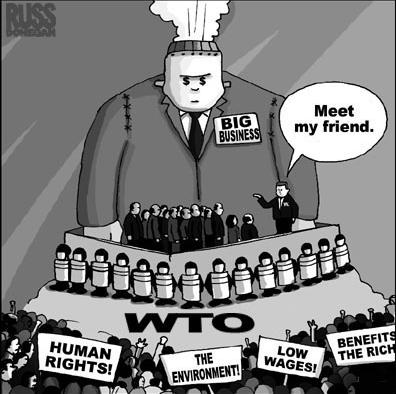 This declaration comes as a result of the activities of the Climate Space at the World Social Forum 2013 in Tunis, Tunisia. The Polaris Institute co-organized two of the 14 Climate Space workshops and was one of the 20 facilitators.

The Climate Space inside the World Social Forum 2013 in Tunisia was organized as a space to discuss the causes, impacts, struggles, alternatives and strategies to address climate change.

Open call to join the Climate Space at the World Social Forum in Tunisia,
March 26-30, 2013

CLIMATE SPACE
RETHINKING STRATEGIES TO FIGHT FOR OUR FUTURE

The 2013 World Social Forum will be held this March 26-30 in Tunisia, where only two years ago, a revolution began and resulted into a historic change that created a ripple effect on the region. Now, Tunisia is an inspiration to movements both old and new, across the globe.